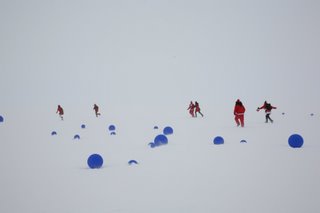 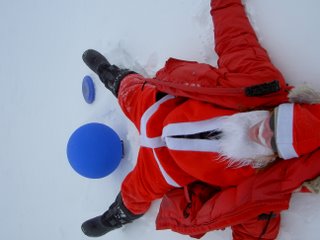 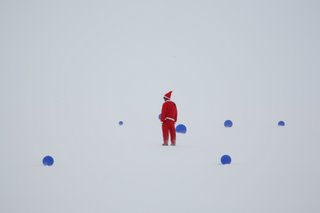 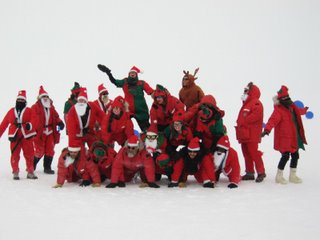 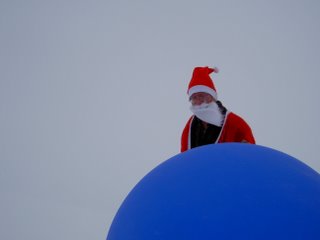 Posted by petoonya at 7:45 PM No comments:

Hanging with the Locals 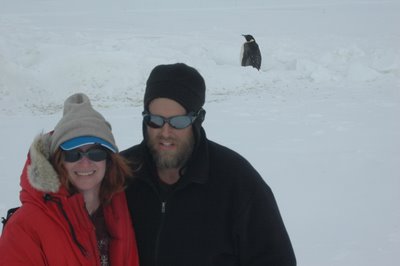 This looks like a photo-shopped photo, but it's really us, "posing" near an actual Emperor penguin hanging out by himself out on the Ice shelf. Now that these guys are rock stars, it was pretty thrilling to get to see one. They are beautiful birds. I saw a few Adelies two seasons ago, none at all last season, so I guess patience paid off in the penguin sighting department. I have a photo of myself with Robert Plant, one with Werner Herzog, and now one with the big Emperor. But really, these cheesy snaps are just momentos to mark life's little exciting moments - stuff to show people to prove that I had a pretty fun life...but none of the abovementioned captured moments compare to the rich experiences I've had with the other "guy" in the photo...Happy Holidays to all those reading this blog!
Posted by petoonya at 7:33 PM No comments: 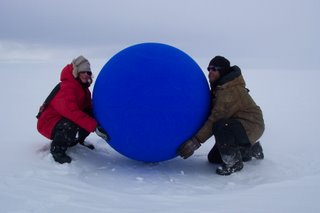 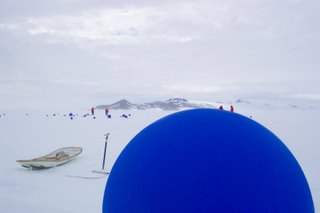 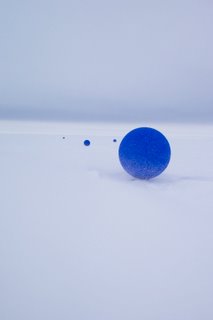 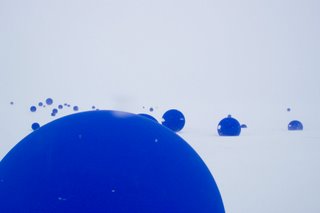 Boy, has this been a great season for getting to hang with the Artists & Writers grantees for this Antartic cubicle dweller. These photos are of the Stellar Axis Project by Lita Albuquerque, a conceptual artist who has a detailed and interesting narrative on this project that I won't even attempt to relate here - aside from all the geek speak, it is just plain cool as hell to look at! Especially in the white out condition where I found myself during my official "boondoggle" to get out of the office. I worked with a team of 5 others anchoring the 55 small balls into the snow. The spheres are in the pattern of stars of the southern sky, so their placement is not random. I cannot beleive how much fun I had doing this - mostly because I got to work with Simon, the scientist on the project, who is not afflicted with the coating of 4 months of labor camp crankiness that has descended on me & other townies. The other reason it was so much fun is because I love this weather....give me white out, blowing snow sideways, near blizzard conditions and I my spirts really soar. So many people whine & cry when the weather is like this & want it to be oppressively sunny all the time, and I don't get it. I am in such a minority with this that I get to go do cool stuff like this in this weather because no one else wants to. To me, it is so much more surreal & otherworldly to see these blue spheres this way...like they are posed in front of a swanky cyclorama - no horizon - no sky - just a void of empty stillness. Snow started collecting in little blobs on the sides of the spheres, and it looked like they were wearing little tortured mouths...they had personality that changed with the weather. We bonded. It was magnificent. I was only out for a few hours but my spirits were so lifted after being out in the cold & working on a project that I begged to be part of the takedown crew. At around 5:30 Will came by in his truck & gave me a quicker ride back to town (after posing with me with "Sirius", the biggest sphere) as we'd gone out in the Pisten Bully. All in all, a grand afternoon!
Posted by petoonya at 6:50 PM No comments: 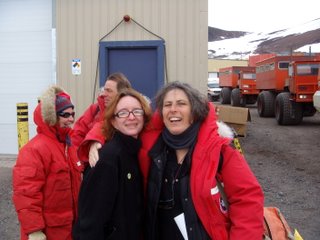 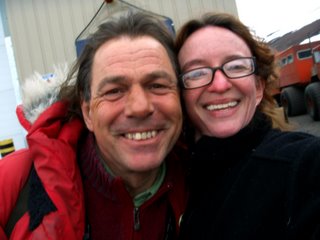 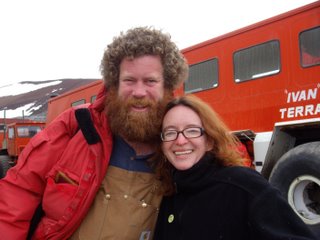 These photos are of Anne Aghion's film crew, who were here under the Artists & Writers Program of the NSF. Anne, Rich and Sylvestre were an absolute delight to get to know & hang with. They have been here since the first day of Winfly, were out in the field for 7 weeks, & just came back last week & left today. Anne is from Paris, Sylvestre resides in Quebec, and Rich is a Brooklynite. They were everywhere with their camera & giant boom mic, filming people eating, bag-dragging, sorting mail, washing dishes, bowling - as well as getting to go all the cool places us townies may never see as station workers - places I'll probably have to come down as a fat-walleted tourist to see. It is ironic: for one year now I have hung in ecstatic anticipation of meeting the iconic filmmaker Werner Herzog. I got to meet him, and tried not to be a sycophant slinking around trying to somehow get more deeply into his psyche - which I inevitably got to do by participating in the several talks he gave to the community, and more so by getting to visit with him a bit on a one to one basis - but he was so busy filming & flying all over the place that I didn't develop the casual friendliness that happened with Anne's crew. I was probably also holding back & not wanting to bother him with my obviously star-struck, social ineptness. But with Anne, Rich & Syl there was teasing, baudy tales, long dinners with roaring laughter & real conversation. I made some new friends - delightful, funny, creative friends. So the irony is that by the time the 120 pax left this morning, it was the filmmakers I wasn't anticipating meeting that were the hardest to say goodbye to. Herzog left too, and I waved at him feeling truly honored to have been in his aura - but Aghion's crew touched my heart...as well as my "so-well". Bon Voyage mes amis!
Posted by petoonya at 4:03 PM 1 comment: 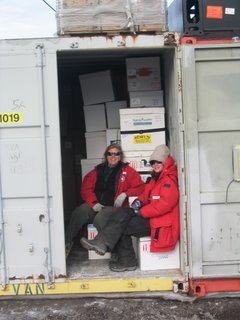 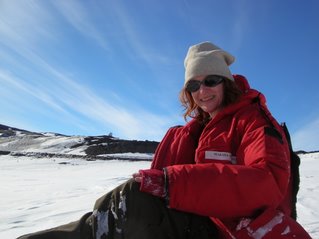 I know it's been a very long time since I've written, but I've been a little "crispy" lately...actually they call it "toasty" here - right around the 100 day mark, a lot of us that arrived Winfly were starting to meltdown, get cranky, blow up over small things. We are cooped up & ready to get out of town! Luckily, my boss knows I can't be trapped in an office all day so I get to go out & hang out inside milvans (pictured above inside that big ugly steel box)...the other picture is just me sitting outside, enjoying the warm weather. My birthday was awesome, with Will taking me on a special "boondoggle" and treating me to a much needed massage. The Thanksgiving holiday was great...Herzog has been hanging out with McMurdans & showed his new feature film to us that is coming out in the states soon ("Rescue Dawn"). It is a terrific film, and a true story...we are all starting to make rough post-Ice travel plans, now that our stints are half over. It is good for me in the "crispy" moments to look at the bigger picture of coming down here: great cheap travel opportunities and a job you don't have to give two week notice for in February. Will write again soon - must get back to my data entry!
Posted by petoonya at 6:39 PM No comments: