Things are Really Speeding Up Here at the End... 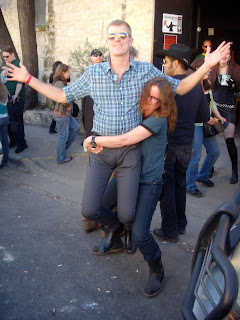 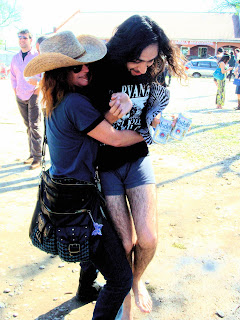 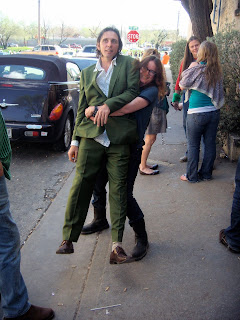 Though this top photo might look like a still from a low budget, guerilla improvised version of The Crucifixion, it is just me trying to pick up a tall friend of mine for a photo montage I was plotting called "how to pick up men." (potential title for first photo: "Trace as Jesus being helped down from the Cross"). I noticed a strain in my lower back after my third pick-up, so the montage became a triptych (shown here in rough form.) At 49.5 years old I continually push myself to do ridiculous things (like skiing, for example) to prove that I am not old yet, and this time of year (SXSW) in Austin always takes me back to when I fell in love with this city 31 years ago. South by Southwest is for no good reason utterly complicated now. It is so overwhelming with the number of bands and films playing, that I cannot imagine how a  non-local navigates it. The great secret is that if you have been here forever like I have, you know all the fun and completely free stuff there is to do and you run into all your old buddies and get to slam dance with guys with bald spots, long gray beards and pot bellies. This southby was epic for me. Epic because it was only the second time I forced myself to do the whole 10 days of film and music. I reluctantly bought a film pass & was immediatley glad I did because half the fun of this thing if you spend lot of time alone like I do is that you hang out with people in the lines waiting for movies. Like the tweaky conversations I've had in the umpteen Springsteen lines I've stood in, I find lots of good film-geek pals that I cozily bond with. When the music starts to overlap with the film fest things get really crazy. In a town with no mass transit to speak of, if I didn't have a scooter I probably wouldn't do any of it. Once I surrender to the zone of mind numbing slogging to free show after free show, I am surprised to find I am having fun and that this fun feels Very Important. It starts to feel like the Most Important Thing in the Universe. I end up going home solely to sleep and poop my dog, then back out to see all this raw and stunning talent flailing itself out there everywhere. I stood in rapture watching the Riverboat Gamblers tear up this punk club at two in the afternoon, then hopped on my scooter and raced to see a film about the friendship between Mike Tyson and Tupac Shakur, where the director held a heady Q&A afterwards that stunned us (the whitey-white audience) to silence. I got to see Victoria Williams at a Taco Bar where the PA over her head blared "Number 23, your order is ready" every 10 seconds during her intimate and reverent set. She took it in stride, as I knew she would. Saw new docos on Bill Hicks, Levon Helm, and Jean-Michel Baquiat. I ususally don't view non docs at film fests, but the some of the narrative features I saw were stellar. They were: Lebanon, PA; Mars; Winter's Bone.

Oh yeah, and I saw the Gourds too.

(an aside, working on the triptych: I thought of titling the second photo "Me and My Mexican!" or "I Found/Stole Me a Mexican!").

So, as is my blogging custom, I am going to wring out of this experience it's deeper significance for me. For someone who used to have a lot of "scarcity" thinking (refer to 80's new-agey texts for "scarcity complex" thinking explained) as I did, it is a little frightening to surrender myself to one joyous experience right after another. It feels like I haven't earned it, and that I should have to "pay" somehow for all this joy with some future drudgery or pain. I used to let myself see one or two bands during the whole festival, and spend the rest of the time at home sort of worrying about the time in between - I seemed to need time to stare at a wall between times of having my mind blown. I was open this time to the possibility of having continual fun and it happened on a fairly regular basis. I used to think I was supposed to suffer! Is that what those 16 years of hangovers were about? I had so much fun the night(s) before I had to make sure I paid by horking my guts up for 47 hours. Because my life has been consistently filled with deeply fulfilling experiences for about the past two (or maybe six) years, I have had to come to the realization that there is no price to pay, there is no shoe that is going to drop, and as the old saying goes: the sun shines of the good and bad alike. Being sober 17 years has given me many gifts, but the longer I stay sober the more interesting and subtle the gifts begin to be. There are people in my life who say on a regular basis to me "everything is going to be okay" and "everything is always ok all the time" (I really like that one). Bruce understands when he sings "it's okay to have a good time" in one of his songs, so he must know how hard it is to give oneself that gift. It seems startling to me now the importance I used to assign to worrying. I think if there is a hell, it is made in the six inches between your ears. It is difficult not to see that the world is a wonderful place when passion and creativity exists everywhere all around us.
Posted by petoonya at 8:23 PM 2 comments: