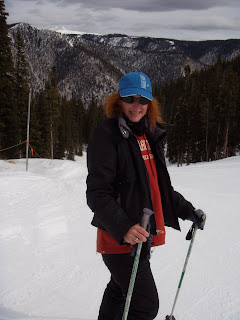 Since my last post there has been: redepolyment Feb. 14th from the Ice, two fun filled weeks of travel in NZ with Will (he has detailed the itinerary on his blog, which you can read by clicking "Blog de Brubaker" under the "links" section). I returned to Texas to reconnect with family & Fergus while preparing for a trip to Taos where I was going to go to learn to ski. Now, this is a sport that had never interested me, or really crossed my radar, until I visited two ski resorts last year and saw that people who skiied appeared to be really enjoying themselves. I'd had a semi-disastrous snowboard lesson in Jackson Hole - but despite the physical & psychic pain of that day, a seed was planted that made me want to try again. I decided that once my broken tailbone had healed, that I would consider taking snowboard or ski lessons again. After talking with lots of people, I decided skiing would be a better option than boarding, and I researched the internets until I found a ski school that included lodging, food, lessons, equipment and lift tickets for one price. The place I found was in Taos Ski Valley, so I paid them 6 months ahead so I'd have something to look forward to.

During the flight to Albuquerque I had the usual mind-sabatoge that occurs anytime I'm diving into the unknown: "what the hell do you think you're doing - you're not athletic!" "you're going to fail big time!" "you'll be the ONE person in the class who can't "get it"....etc, etc. Aside from having a natural fear of heights (which would include vertical drops), my fear was intensified the closer I got to the Ski Valley. On my 3 hour drive from ABQ I pondered bailing out & going to some other town, or staying at the lodge, eating the 4 course French meals and NOT skiing, or just showing up at a class or two & spending the rest of the time on my beloved square in Taos city. Thankfully, the more mature part of me put the kibbosh on those negative thoughts & decided after I'd arrived at this amazingly happy & supportive place that I was going to give the lessons my best. Short story is I had an amazing time - it was incredibly difficult & demanding psysically and psychologically. No part of my body wanted to "lean forward" going down a steep slope. When I fell, which was often, it was not pretty, and I always saw it as a failure. I had the same teacher for 6 days...after the second day I had him all to myself. He fussed at me & rolled his eyes because he said I was "holding back" and "not letting go" - two phrases which I really don't wanted associated with myself in anything I do! But I had to do something really difficult for me: I had to trust & believe what this instructor was telling me, NOT what the voices in my head were saying with increasing intensity. Smitty said to "lean forward to GET control" "be aggressive when you want to lean back". Everytime I fell I asked him "what happened?" & he said "you didn't FALL - you CHOSE to SIT!" Ack! He was right: when I got scared, I just wiped out from sheer panic. So there was a moment around my 3rd day where I made a decision to DO what he was telling me to, no matter how much the Voice told me he (Smitty, my instructor) was wrong. Getting my body to DO it was harder than I thought -but I only had to do it once to see that he was right, and that set me free to do it right every time. Against every fibre of my old programming I stood perched, with what was now semi-comfortable terror, looking down a slope; I thought about where I'd make my first turn...and then threw my body headfirst down the steep bowl (with a Braveheart-like pre battle scene growl on my face to make me feel agro) and felt for the first time the absolute control & power of going down the mountain, instead of just sliding fearfully until I fell - I was finally the one in control, not those sticks on my feet. I had my first blissful experience on skis....yeah! this was it! I didn't just successfully ski down a mountain with pretty, practiced turns - I had also succeeded in exploding an ugly old ultra negative scowling demon off my shoulder that had been perched there, to mess with me anytime I would try something new that felt awkard, uncomfortable, and had a steep learning curve. It would say "this is too hard for you! go read a book instead." It always wants me to play safe. But ignoring that voice & turning my trust over to this crotchety old ski instructor made me realize that I had not surrendered my will in this big a way in a very long time. It was all about trust, something I didn't realize that I was lacking so much of...the rest of my ski lessons were challenging & scary & really really fun. One day I forgot everything I'd learned & pretty much tumbled down an entire run. My last day I cruised down "blues" all morning, feeling confident and free.

Aside from skiing I met incredible people at this ski resort..there was comraderie at dinner...hours of laughter & sharing divine 4 course meals served by the 72 year old French hotel owner & expert skiier who beamed joy from morning 'til night. I sat every day with people who'd been skiing for 30-40-50 years and were just as interested in my experience as a first timer as I was in hearing about their extreme heli-ski adventures. I learned that the process of learning to ski was for me much more than about practicing some seemingly simple techniques - it was about conquering some big and ancient fears about my own abilities. It was about being willing to take a risk & succeed(!). It was about the joy of comradarie of a shared passion for a sport where the learning never ends.

I left Taos with this chunk of confidence in my system that was fresh and new...it felt like a wide beautiful room one would walk in after being in a dark cave...it felt like a beautiful bird sitting on my shoulder, whispering into my ear with a sparkling gleam in its bottomless black eye..."more..." ..."let's go do more.."
Posted by petoonya at 10:27 AM 1 comment: