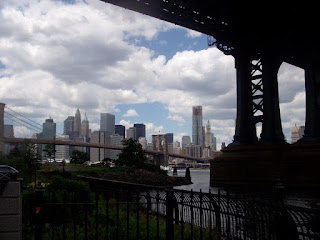 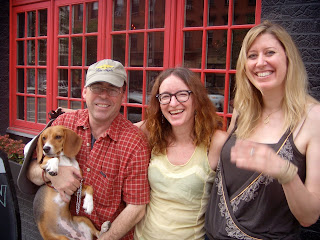 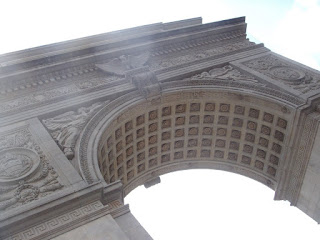 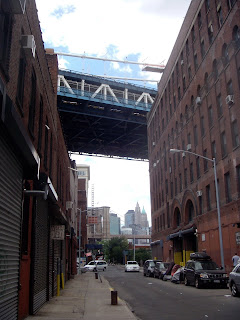 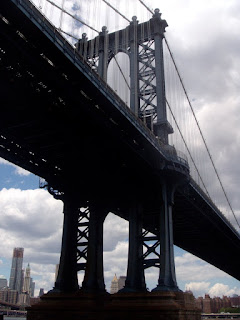 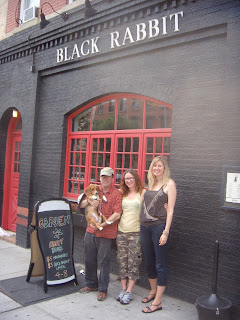 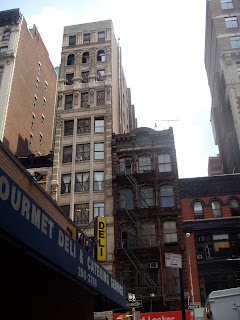 There are a few places on the Earth that my soul likes to call home, and one of them is New York City. I fell in love with this town when I first saw the WTC towers out the Eastern Airline window in 1978 (does anyone remember Eastern Airlines?) Having grown up in an insulated, perfectly groomed and soulless Houston suburb, New York explained why I always felt I was not in my true geographical element: I craved excitement, and NYC had a bottomless supply. I loved it so much I moved there after graduating college in 1983, so for a couple of years I got to enjoy the old gritty pre-Guiliani cleaned up city. I lived in Manhattan and Queens in the 80's, but my last three trips have been based out of Brooklyn. I am lucky enough to have 3 magnificent friends who live in this exciting borough. On one trip, I didn't even go into "the city." This time I went several times, but actually found Brooklyn more interesting to explore. Manhattan is obscene now: Times Square is like a surreal futuristic wasteland: zombie-like sneaker-clad tourists hoisting cameras at the over-the-top neon...The Bowery feels like a Vegas strip mall re-enactment of "The Bowery", and the biggest shocker: Lower East Side and Alphabet City: all sparkly. What I remember is Urban Decay -  imagine a scene replete with sprawling alkies, defeated hobos, crumbling squats, blowing newspapers and piled up trash - these were/are the sights that make my pulse quicken. Though it may seem callous to want to view squalor, it exists whether I see it or not, and it always feels like something I needed to see. Plus I used to live right on the edge of the kind of lifestyle that would have me sprawled out on the streets too...I just usually had someone (some dude) steering me back to my house. There but for the Grace of God go I we always say, those of us lucky enough to have quit self-destructing before it was too late. So when I see people living feral lives in a glittering urban mecca, it not so much as a voyeur of schadenfreude as it is a refusal to acknowledge that the gap between us is as large as it appears...but where are these people now? There were Everywhere when I lived here in the 80's - they lived in makeshift villages in the parks & the streets. It's like they were rolled up in a giant carpet and whisked off somewhere as if they didn't have a right to live here. Only rich people can live here! Now, every street, every stoop, every corner, was slick. I went to a show of my now-formerly favorite band on the Bowery, and this passionate performer seemed almost deflated by the Mall of American type atmosphere that infuses the Lower East Side (not to mention that the audience was full of corn fed squeaky clean midwestern types). I mean, I went to a former apt at 4th and Ave D, and it looked like the stoops and streets & sidewalks had all been hoovered as if it were a Disneyland exhibit of "New York." I used to have to step over several generations of a Puerto Rican family whose evening ritual was the hang on the stoop and visit with the neighborhood freaks. There was not a soul sitting on any stoop there. I tried it (stoop sitting) one day at Kate's building and felt conspicuously awkward. The whole island of Manhattan had that feel - that of an exhibit where you can't muss up the pretty street. But I still have to love it, as there is no place like it in the world, but if it weren't for Brooklyn I might be in too much despair over it to ever go back.

My friend I stayed with lives in Park Slope. Another friend lives in Red Hook, and yet another in Greenpoint. I spent juicy, juicy hangs in these neighborhoods with my friends, and explored other neighbs on my own while my friends were at work. Williamsburg was a little like 6th street or SoCo here in Austin, and I was surprised by how ugly the buildings are there. Red Hook and Dumbo earn points alone for the brick streets. Greenpoint has the great views of the city, but it is kind of flat - and everyone there is white. So Park Slope, where I stayed, was the best neighborhood as far as bieng funky, pretty, diverse, and having greenery. I don't really need much "nature" in my travels, but the leafy residential blocks of New York are really spectacular. I also went to Coney Island, but I think that will be a post all its own as I've always had mythic expectations of it.

This week I just spent in New York was one of the best trips I've had in a while - and I think it was mostly because of the quality of my friends there. You have to made of certain stuff to want to live in New York. One friend I've know since we were 18, the other for 20 years, and one is an Ice pal, and we got together in various combinations to eat and laugh and see each others digs. I had the most delicious bar-b-qued meat I've ever eaten at Rich's house, followed by a Marah show in the City. Then to Greenpoint and the Black Rabbit to meet Richard and Aster for drinks, followed by a ribald time at Mrs. Kim's, a supposed "restaurant" where a bartender friend of Richard's wanted to hear Antarctic details. I wasn't good at supplying them (I always want to refer people to the ancient posts of this blog!) but this meeting turned into a sideshow of goofiness upon realizing this Antarctic query session was more a pre-planned hook-up (by Richard!), with more mixed messages and goobery giggling than a junior high dance. It was great fun though, and I met an interesting person who travels MORE than I do! That's the thing about New York: I find myself in a continual state of expecting something cool to happen, where your always meeting super interesting and engaging people who really appear to want to get to know you - even if it's only for a few minutes. I find this quite a bit when I travel (except for maybe like, Greece, where everyone was surly) but especially so in New York. If it weren't for the "Antarctic card," I'm not sure how dazzling I would seem. I pull that one out if I want to get a buzz around me.

The epicenter of this rich and precious intimate experience was K___. She has been a dear friend for almost 20 years and thank gawd she moved to my favorite place to visit. If one were to transcribe our conversations it would fill a small library, and it would not all be neurotic self absorbed shoe gaze monologues about men/work/looks minutiae. That would, in fact, be only a tiny part..because K___ is that kind of friend you pray you have in your life. She is such a good listener that she could charge folks lots of money just to perform this service for them - we talked so much my throat was raw, and even though I was going through the grieving of having just been dumped by my boyfriend of 4.5 years, she made me feel solid, invincible, "resilient as hell," as she's always told me I was.

There is this myth that New York is a noisy dirty place filled with rude and cold people known as "New Yorkers." From my first day there 32 years ago I experienced a helpfulness from people that compares to the Kiwi's level of friendliness. After two days in my neighborhood, the Slope, I was waving at all the pals I'd made at the deli, coffee shop, pizza town, etc. Each neighborhood is a small town, with village style community and sharing of resources. This is the New York I've always known. I live in a town that is described in a scholarly book as a "lonely city" where it is very hard to find community. I have always felt this to be true, though I think you can bring your own loneliness with you wherever you go. I would like to give New York another try. The Ice has some of these deliriously intense connections also - but next summer I might be Brooklyn bound.
Posted by petoonya at 9:05 PM No comments: