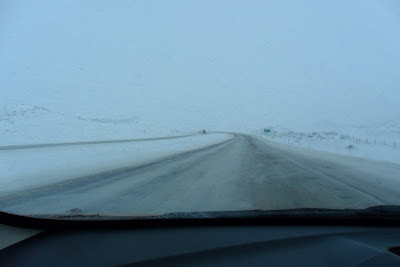 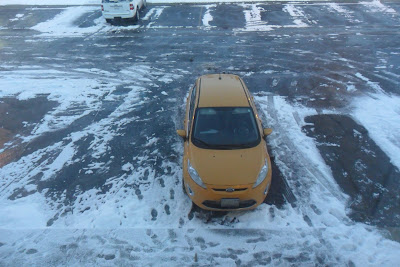 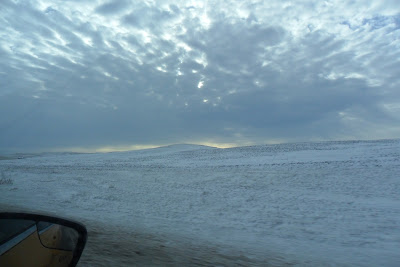 I haven't been posting as not much has been happening. Actually, a lot happened about a month ago but I neglected to write about it when it was fresh, so we'll see what happens when I try to tell the story from memory...

I had a perfect seeming short deployment contract to the smallest Ice station and everything was a go...except for the ticketing, which I was just waiting & waiting for...then in the blink of an eye the contract was yanked, I screeched into my driveway after hitting a few curbs on the way home during the phone call to Denver knowing the only thing I wanted was to drive like a madman to North Dakota. So I did. If I wasn't going to deploy and go through that glorious period of being shuttled and cosseted jet setter style halfway across the world on my employer's dime, then I was going to do something spur of the moment adventurous, half assedly planned but reckless enough to feel like an adventure, with a reunion with someone I really wanted to see.

There is nothing like that feeling of driving hundreds of miles across the country by oneself. Whole areas of memories emerge in great detail, and little pockets of trauma pop up and seem to resolve themselves purely by just driving with them. I had this feeling when I drove to Nebraska in 1987, as I was really running away from/to something then. I did this trip the same way: didn't have my car checked out beforehand (would have been too mature, made the trip seem less like a Springsteen song), didn't have tripleA, don't know how to change a tire...but I really wasn't worried about this because I was driving on highways and highways are always near services, and I had my cell phone and iPad.

I found out about my yanked contract at about 2:00 in the afternoon and went home to pack my car, get all my dog stuff together, and plot out my trip with my GPS, reserving my first night's hotel room in Bozeman. Mapqest said it was about a 10 hour drive - that sounded doable I thought, ignoring that little intuitive voice that remembered that it always took MUCH longer than the gps said. I was so excited to get up at 4:00am for my trip that I could barely sleep and ended up fitfully sleeping only a couple of hours and getting up at 3:30 and hitting the road by 4:00am. I didn't realize there was so much fog that early! Just getting out of Hillsboro through Portland was incredibly stressful with the fog, and intense traffic heading to the airport for the 6:00am flights...by the time the sun came up I had been gripping the steering wheel so tightly that my hands were almost frozen in that position. The daylight made the trip easy..and once I was over the Columbia River and into Washington state, I felt the drive was gonna be easy. I was in for a big surprise.

After my one & only rest area stop of the day outside Spokane, I noticed something odd looking in the atmosphere ahead. As I hurtled toward Spokane the cars heading the other direction were covered with snow. Cool! I thought - snow! It was cool for 10 minutes and then it was terrifying for eight more hours and two entire more days. I just happened to time my 3 days drive with a severe winter storm that iced over the roads and had blinking signs over the mountain passes about tire chains and winter conditions. As if seeing a foreign language, I ignored these signs and kept driving. I started to see less and less cars on the roads (certainly no ford fiestas) and worsening conditions. I saw that the road was icy, but doable at a very slow speed. I hadn't eaten and needed to pee, but kicked into survival mode & put stopping off the table and made getting to my hotel my only goal. Like a wired zombie I stared at the only part of the higway I could see: the yellow or white line or tiny sliver of road edge which became my only spec of comfort....I saw  rest areas along the way but the ramps to them were white and shiny and uphill-no way...I tried to follow the big rigs tail lights to see which way the road bended, but they drove too fast and I was alone again, going very slowly, driving almost blind, until I found another set of friendly tail lights to hug near. I got to my hotel and when I stood up out of my car I felt I was in some sort of stupor - I noticed it was very cold...my car said 5F degrees. I hoped my car would start the next morning. My little dog was too cold and wouldn't potty outside but I kept running him around until he went. I was NOT going to leave that hotel room until my big drive the next day. Feeling empowered that I had "made it", I felt good about the next days drive, which was twelve hours of clattering across ice and having to hold the steering wheel so tightly so the tiny toy sized wheel would not hit a patch of ice and pull the car off into the black forest or off a sheer cliffside. I accepted my driving fate - I had claw marks in my palms from my fingernails...I didn't stop for food, only ate whatever nuts, candy, donuts was within reach. When I made it to my hotel room my second night, in Billings, my zombie-stupor state was compounded by the number of hours spent in this state of extreme concentration while know I could die at any moment. There were several moments when I felt that I could just fade into the white and quietly disappear...but those were only when I had lost my tiny spot of road I could connect with or when the drifiting snow upon entering North Dakota brought on a new level of fear.

On my third day the roads were still solid ice - the hotels I stayed in were full of people smart enough not to drive, and looking at me like I was crazy when they saw what I was driving. There was a moment when there were no other cars on the road, I was about 6 hours from my destination, it was 0 degrees outside, I had no cell or 3G signal, and realized wiht a heavy heart that if my car broke down here me and Fergus would probably not survive the night. I felt all the emotions I think one might feel upon confronting this reality: shame at not being better prepared, foolish for not checking the weather before hand, self chastisemnet for risking my little dog's life too. Then I saw I sign that I wasn't sure I'd conjured or not. It said you needed to have survival gear in case of a breakdown out here in the middle of nowhere. Even in West Texas you see a truck every hour or so.....but it is WARM there - warm all the time. This was something I'd never dealt with outside of an environment where I was in a big tractor surrounded by mechanics and survival gear. So, I thought, as I was crossing in to ND with a straight shot to Watford City, that this could be it...I felt myself running out of hope and the Ice was thicker and I was having to drive slower and slower and now it was dead of night. Daniel called me every hour to check on me - I felt really supported in that, and when I finally parked in his restuarant parking lot in downtown Watford City I felt the burst of a second wind: I had made it! The place was so busy, so much snow, so many big rigs, so many men in carhartts. It felt like home! I wished I'd just moved here and not had an apt back in Portland...Portland ha! Now it made sense to me why I was so underwhelmed in Porltand. It was just another hipster city...like the one I had live in for 30 years! This, North Dakota, was more like the wild west or McMurdo and just utterly different. A work camp! A city full of men! The reunion with D. was like melting into companionable comfort...like entwined tigers needing their tribe of each other, my last reminder of my last season at McMurdo. I stayed three days, drove around ND a bit, checked it out for work. Got a call for an airport job back in Portland so drove back in perfect roads conditions to train as a ramp agent loading cargo planes at PDX.

Now I'm writing this last bit many weeks later and that trip seemed like it happened a zillion years ago - but the one thing I know is I need to do stuff like that. I need to do a spur of the moment long crazy road trip every once in a while to feel that part of me that feels really alive. When I was on Ice I felt alive the whole time, but now that I'm stateside I'm seeing I have to work really hard to give myself what I need. I don't want to make this post too long so I'll write about the job and other exciting things in the next one...
Posted by petoonya at 10:35 AM No comments: