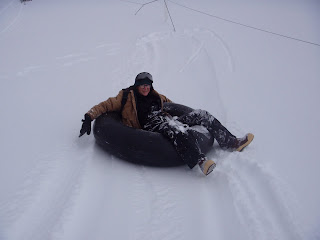 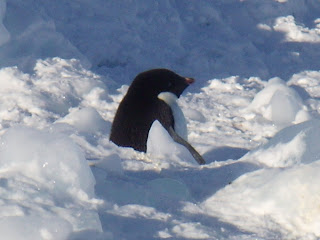 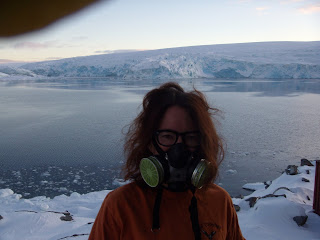 The first picture is of me tubing down the glacier behind the station. It's a good size bunny hill - long & gentle til you get near the bottom, where jagged rocks await you. As someone who grew up in a climate on par with Qatar, success for me will be represented by pictures of winter. As a child I was obsessed with a magazine ad of the Marlboro man riding a horse through an austerely silent and snowy forest with big flakes falling around him. I hung this picture on my wall and even asked my mom for the 50 cents to order the poster (this was in the 60's when you could mail two quarters in an envelope & get something cool mailed back to you). I was a 5th generation Texas who fantasized about snow because it was something I was going to have to travel to find. It was mysterious & desirable to me and I don't know why. Growing up near a sketchy coastal beach that I was rarely tempted to visit, I was amazed that that is all my friends in high school wanted to do once they obtained cars. Bloated bodies in the sun, drunk sunburnt rednecks, kids stabbing sticks into dead jellyfishes, soiled dialpers carelessly tossed into the wet sand, not to mention the lack of intellectual stimulation - it just wasn't my scene. I've always been fascinated with the almost unanimous opinion that a tropical landscape with white sandy beaches & 80 degree weather is something not only desirable but worth paying lots of money to get near. It just seems like a failure of imagination. Even here, where I am "wintering", the days are growing longer & the more daylight we have the more uncomfortable I am with it - I loved only have an hour or two of light a day. There was something almost holy and ecstatic about sitting at a desk at work during pitch darkness. It was freakin' bizarre. After a brief stint in Tejas I will be in 24 hour sun again in November...but I have loved the overcast & grey days here - it has been such a blessing after the chronic heat-wave vacations I've been taking for the last 5 years.

The second photo is penguin cute overload. Their adorable, stuffed-animal like cuteness is almost ironic against the harsh landscape. And seeing wildlife down here can soften the toastiest soul.

The third photo could probably be used as an art project if I could come up with a good enough caption, but it shows what I'm willing to do to spend June, July and August in a snowy paradise. A co-worker & I were "carpet cleaning" with no previous experience, dumping stinky toxic cleaner into this fisher-priced looking machine of dubious manufacture and quality. It's instruction manual was fat and in Engrish - and the plastic contraption appeared to have been purchased off the shelf next to the "Easy Bake Oven." Is the carpet cleaner now? I dunno. I just signed up to do it to shake up the monotony of my routine. I got some chuckles in with my co-worker as we dumped filthy scunge on ourselves every time we changed the water. I am wearing a respirator as I was concerned about the fumes of the cleaner and hey, this is Antarctica where everything is done either half-assed or on overkill. Ultimately I didn't wear it as it interfered with my glasses. But I did get a picture of me in it, which was really important. Things are getting a little more exciting as we are ramping up for another port call & I get back on the boat in a month. The Cold, Deployment, Redeployment and Pier Ops (or Ship Offload at Mactown): why I love the Ice.
Posted by petoonya at 7:37 AM No comments:

"Happiness" is the title of one of my favorite films, and one we just watched here on station on what is known as "F&cked Up Friday" movie night. We try to watch things that are bizarre & disturbing, but I also like stuff that is good, so I chose Happiness. So many things about this film are great, but mainly it's a great script with some disturbing subject matter and super interesting story lines. So much about it to me seems to be like real life, just exaggerated - and it's most disturbing parts have an almost epiphanal nature to them; everyone deeply flawed, and deeply aware of it. But this ramble is not intended to be a movie review. I have been thinking about the concept of happiness here at Palmer a lot lately, mostly because the deprivation of stimulation and dearth of activities has me in a sort of withdrawel state. I couldn't wrap my head around what I was feeling here...I don't feel on edge or "crispy" like I can at McMurdo with all the crazy personalities there. I don't feel desolate or lost like I can when I'm in the "real world." But I'm not ecstatically happy either. I don't even think I feel happy...but I feel something...and I feel like something is missing. There is the reality of Winter tasking which can be very very dull & non stimulating. There are only 16 people here and they are all good natured and pleasant enough, but I came in half season and didn't bond with the original group who came down here together. I don't have juicy, bawdy, mealtime conversations like I can at McMurdo. There's no gossip here so that is probably good, but if I were to be perfectly honest I kind of miss it. There is no privacy here so there is nothing to gossip about. I'm reading a book entitled "The Geography of Bliss" where the author, who considers himself an unhappy person, travels to all the places in the world that report the highest happiness rates. What he is discovering is that what one culture considers happy may not be what another does. Americans think they need to be happy all the time or they panic and think something is wrong with them. But what if it was okay not to be happy. I used to be addicted to fun and highs and drama. Now I am attached (I won't say addicted) to having what appears to be an exciting life. I think this makes me happy. It does in lots of ways because it is the life I always dreamed of having, but built in to that lifestyle are certain miseries. A lot of us Iceheads talk about the miseries of working on Ice but we put up with it. Misery here feels sharper and more interesting than misery back home. My back home unhappiness has an undertone of panic to it, and I think that is because I know there is this wide world of choices I could choose to get out of my misery: road trip, movies, hair-cut, buy cool boots, painting workshop, adventure travel, coffee shop, internets, etc. But here, where my world is in two buildings & there is NO place to walk to, misery takes on a different quality & shape: instead of something making me nervous that I want to run from, I know I CAN'T run from it so I HAVE to live with it. And living with it seems to soften it, sweeten it, and make it less miserable...and eventually it fades away and peacefulness takes over. I used to only know thrills and freak outs. I was building toward some sort of thrilling thing all the time and when it fell apart I fell apart. Now, the pleasures are small, but they take on a deeper meaning here in a place with few options. I can read or watch movies in my spare time. People play board games & cards here on weekends (I was warned this would be the "fun" happening in Winter), which I am not interested in, so I get a lot out of the reading and films. I once heard a Bob Dylan quote that stuck with me for a long time. I don't remember it exactly but the interviewer asked him if he was happy and Dylan thought it was a dumb question because he didn't think it was really important whether he was happy or not - that there were states of being that were much more interesting than happiness. This rang true for me and appreciated hearing something vocalized that I'd always sensed and didn't have words for. Am I happy? I don't know. I usually don't know until later when I'm in a situation that is very different that what I've experienced before. What I do know is that I'm not unhappy...in this small of a town, I have to pull upon some pretty adult resources like acceptance, restraint of tongue, tolerance...all good things and probably good for me to practice. One can't indulge in histrionics in a place where you live and work side by side 24/7 with a small group of people. I feel a dearth of something here...a dusty dry empty place in my soul...a place usually filled with intellectual and creative external stimuli. But after the intitial uncomfortableness with this emply place, I saw that I was just in a new place I'd never been in that felt sort of prison-like, but that instead of panicking about it I would just explore it & live in it. I have gotten used to it & it is not so bad. I have moved beyond just thrills and angst, and settled into the middle way, which I never ever in the past would have thought could have brought any sort of happiness with it, but might.
Posted by petoonya at 1:34 PM No comments: