A Mishmash of Meanderings

Luckily, I don't have annoying parents, but if I did, thank god for the internet so I could find out how to deal with them. Think of all the poor sods who had problems before google existed. What did they do? My StatCounter(tm) embedded in my blog shows me the google searches that pull up my blog. This (the title of this posting) was one of the funnier ones, and unfortunately they would not be able to get help from my blog, as I am too old to have to explain my lifestyle to anyone! But I remember those fragile years fresh out of college when you have no effin' idea what is going on & what you are going to do with your life. I felt blindsided by reality; I thought my college degree was going to get me a "job" of some sort, but I quickly saw I was utterly on  my own to figure out what kind of life I was going to have. Because I started off in office work, that's where I was 20 years later when I finally got the 'nads to live my dream & quit secretarian' to go work grueling long hours outdoors in Antarctica. I just saw a Springsteen show & he was singing about the working class and moving up out of the "cold lumberyard," and how ironic it was that I went from a cozy office life TO the cold lumberyard. Literally, my last and most badass job on Ice was in the lumberyard at McMurdo, trying to pull out 16 1" x 4"  x 20"s in 40mph winds in negative 5 weather and figuring out how to unstrap the load without it falling over the hillside for the whole town to see - doing more physical work in two weeks that I can remember doing in a whole year. And the best part was how fulfilling it was at the end of the day. There was a notion when I was growing up that the "trades" were for people who didn't go to college & were somehow less valued, but I think the secret I've seen is a trade can open up the world of work possibilities for someone. I have mechanic, electrician, plumber friends who are doing very high paid work in exotic locations all over the world & seem to be resistant to layoffs. Earning a college degree was heady and exciting and full of hard work, but it taught me nothing about the world of work. My work ethic was engrained in me early in my life, and that is why I've had success at my jobs. Luckily, there are a handful of jobs at McMurdo for non tradespeople that are not desk jobs - and that is the place I find myself having the most fun.
Working seasonally has changed everything for me. I no longer own property. I am allergic to buying stuff because I have to move it around so much. My "down time" in Austin is spend trip planning because nothing else makes sense anymore. I bought art supplies & tried to do some arty stuff now that I have my own apt., but it was only entertaining for an hour or so, and because I know I can do anything right now, sitting in my house making stuff isn't as much fun as it used to be. When I painted for years I knew I was on a work/pay mortgage track. Now I on a 1/2 year of freedom track...I have a big trip coming up: London, Scotland, Finland (a bunch more Baltic countries), ending up in Berlin. It is written in some people's DNA to be adventurous or nomadic or to do artwork in a cozy home environment. If you "go with what glows" (Natalie Goldberg) for you, you don't have to explain anything to anyone - and besides, if someone is uncomfortable with your lifestyle, it has nothing to do with you - it is all about them.
Posted by petoonya at 8:45 PM No comments:

And if this wasn't enough, I get to see Springsteen this week 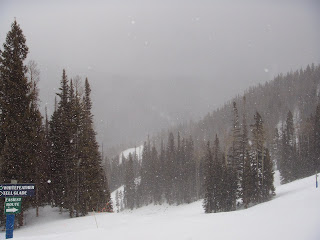 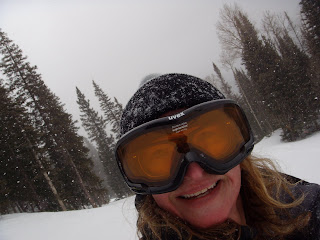 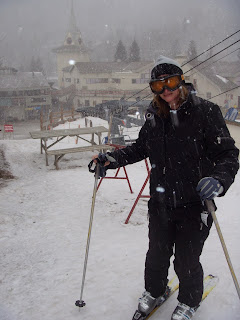 Closing week on Taos Mountain has surprisingly good weather for this time of year - cold with lots of snow. I have never skied powder before so it was thrilling and challeng
ing. But the skiing is only a fraction of why this past week was so amazing: there was hardly anyone on the mountain, lots of single people at the hotel (I'm usually tacked onto meals with families), and the friends I made this week I will never forget. I was just at the ABQ airport feeling that pulsing, incredibly centered feeling one gets after a powerful life-enhancing event, and wondering why this ski week was as mind blowing as the painting workshop that I also go to in Taos - and it must be because of the incredible positive energy and genuine happiness radiating from the people I am around. My whole being felt like a crotchety old caterpillar bursting from it's cocoon with high tech quick dry fabric wings, black & glossy like my budget ski costume. Almost floating (instead of tumbling) down the steep terrain without effort as the week went on. (I actually saw a video of me skiing this week and I looked more like an armadillo than a butterfly on my turns). And this transformation is mirrored in the bonding aspect of the intense social connections as well. The hugs goodbye are filled with moist eyes as we've gotten so close having had every meal together, running into each other on the mountain, and sharing about our jobs (?), romance status, travel goals, with a bit of gossip thrown in as in this small a community their tends to be a lot of drama going on. But my non skiing transformation during this week was in my perception of myself of a slacker, addled type person, to someone who people find interesting & worth talking to, worth inviting to their homes in countries that I love (an am about to visit). I tend to think people are going to find me obnoxious & self-absorbed, but this week I felt true respect radiating from my new bffs...skiing seems to elicit an Antarctic-like camaraderie, and as if God himself was hitting me over the head with the physical manifestation of my deservedness, a beautiful pair of skis was given to me by an incredibly lovely family from Chicago, a gift so generous I was speechless. They had bought a new pair in Taos & didn't want to hassle with taking the old ones back & selling them, and they knew I didn't have any and so now they are mine. I felt so ridiculously unworthy of such a gift, yet I said thank you and stored them at the St. Bernard for next season. It feels like a sign. Like I should move there for the next season & embark on yet a new career: ski-bumette...and there was one special young man: English, just graduated from Oxford, there with his whole family: mom, dad, two younger siblings...he was going to extend his trip & travel to the Grand Canyon, Vegas, LA and San Francisco. He told me of his plans & I encouraged him to alter some of the logitics (absolutley NO hitchhiking!) and gave him my BART card with about $10 left on it. To be able to advise someone just starting out in life, and seeing that open-eyed, youthful eagerness to explore foreign places is just so much fun. My French Canadian gal pal Val, Toni - the amazing fashion goddess, Rex from Amarillo, Tex from Japan, Mike from San Diego...we were the bawdy dinner crew. I didn't think any week could get more amazing than my first one. The second one was. I didn't think there was ANY WAY my 3rd week could get more amazing than my second - it was WAY more intense. I keep waiting for the goodies to stop flooding it but they won't stop.
And I get to see Springsteen this week.
I talked to Will on the phone today & was breathlessly reporting my exciting time skiing. He is settling into what I hope will be a very rich experience for him at Palmer Station. I said "I may not go back to the Ice but may go work in the ski village instead!" And later I thought, oh he might be disappointed if I did that, but then I realized if I hadn't met him, I would've never learned to ski at all...ah the ironies of life.
Posted by petoonya at 3:57 PM No comments: