Feeling homesick during the holidays I booked a trip to Texas during SXSW. I flew to Houston with my dog, dropped him off at my parents house & drove to Austin. As soon as I pulled into the city of my birth and saw the hot boiling streets  and nitemare traffic, I wanted to turn back around and go back to my cold and cozy house near Portland. I tried to do the deal as best I could but found myself mostly slogging around by myself, trudging through the masses on 6th street and SoCo, occasionally running into friends and hearing some great unexpected bands. There was magic: riding my scooter across the bridge with the large moon illuminating the water, while the glittering downtown pulled at me like it had 30 years ago, driving me into the dark places that my soul craved, but that were ultimatley destructive, looking for some phantom magic that I found in chemical euphoria. I love having all that behind me now and being the cranky old-timer squawking about how much my feet hurt, and who can feel euphoric by logging onto Ravelry.
Just being around Weird Austin is worth it's weight in gold. I love living in Portland, but that city has NOTHING on Austin as far as Weird. Austin is so much edgier and Out There, so much bolder and riskier and far out. The freaks less afraid of falling through the cracks, so much more daring and courageous and not afraid of looking like utter fools. The yuppie factor during this time is always startling. Expensive blonde highlighted ironed hair and fake tans while still trying to look like Austin hipsters. I feel like saying to these poseur Californians: no matter how hard you try we can tell you are not an Austinite so stop trying so hard. I can see your nose job scars from across the street. I was always feeling slightly off kilter here this week. My best day was when I got in my car and went north of the insanity of the festival and walked around the Drag and shopped at the Co-op. No more hippies and weirdos on the drag - it's clean and shiny now. UT is no longer for slacker students like me-I probably wouldn't even be able to get in now, but now that I've had a degree for almost 30 years, I am more astonished of this fact than ever, and have more UT and longhorn shirts and hats than I ever did when I was in school and lived here. Now that I am leaving tomorrow I am seeing all the good of this place again. Mostly these days, I just want to sit in a 60 degree room and knit...here are some images from the week: 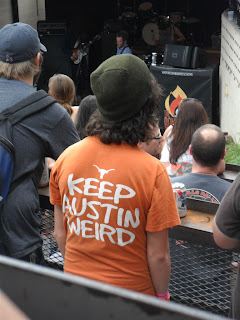 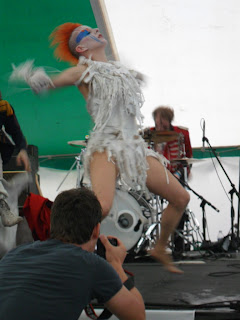 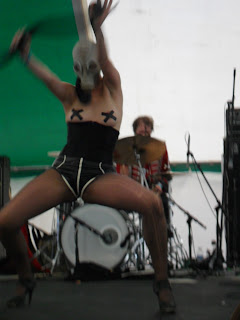 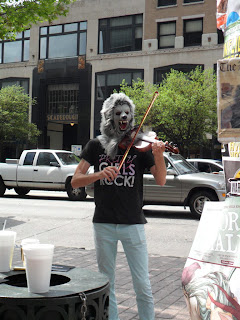 I love being older, and the carefreeness that comes with that. I saw so many young girls who'd spent so much time perfecting their outfits and hair and felt such relief that I don't do that anymore. Some days I wore out what I'd slept in, my gigantic  new black Prada bi-focals the only indication that maybe I had been in some sort of scene at some point in my life. I can't totally disappear from this place: my identity is tied up in several different circles here and it really is "home" in so many ways. I guess I'm kind of a poseur too - I try to look cool, too, by dressing sloppy and having anti-fashion That Harley is not mine: I was just sitting 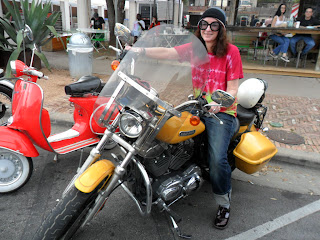 on it. But just like those pix from that German band seen here, this festival is all about having fun by sticking out. In a city with so many creative and uber unusual people doing so much exciting stuff, it's okay to try and look cool or weird or sexy or whatever you want. Back in the punk scene we were all real judgemental about "posers" or kids who wore "outfits" that looked punk rock. But we were doing the same thing - just the opposite, try real hard to look like we weren't trying at all. There were some real punks, but us college kids whose parents were paying their tuition were just enjoying rocking the lifestyle of it: we had apts. to go back to and books to study. I will leave glad I came, but can't wait to get back to Oregon. This festival always reminds me that people can do anything they want creatively, and that the fans are just as important as the artists, and that is is actually all right just to have a good time. It doesn't have to be any more complicated than that.
Posted by petoonya at 5:34 PM No comments: