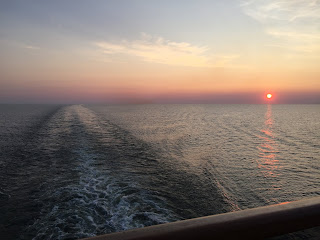 This is my first real post of 2018...the previous two posts were dashed off quickly and not posted when they were written months ago as I felt they were so rough and unedited, but I have felt so self conscious about this writing lately that I haven't been writing at all and it has affected my soul...this little semi-dead blog calls out to me and wants my attention and I have been ignoring it...seeming to go through a period of embarrassment about exposing myself in this way, which never bothered me in the past. I'm just going to try and work this out as I write it now...which is a technique that has been serving me since the late 60's...writing has always connected me to the most solid part of myself.

I've been in Austin almost two years now and the quality of my life is better and I think I am happier in a surfacy way, but I still really miss the intense work/lifestyle/meaning provider of working on the Ice. I have pretty much always been able to count on travel as getting me back to my center of joy but I've had a few experiences this year that have upended that theory. I just got back from a Baltic cruise where I went to all the Scandinavian capitals and Russia and I was not able to contact that giddy fun part of me that is euphorically happy on trips without fail. It just didn't happen this time. And it did not happen in Taos in May, which was really disappointing. I'm lying when I say it was disappointing because what it was was scary. To have had a miserable experience in Taos and then a grin and bear it trip to the most beautiful place in the world has upended my sense of who I think I am and what I was counting on to get me through the next 30 years....maybe I'm being too dramatic, and probably am, but it was really chilling to spend six grand and not really have that great a time, and really couldn't wait to come back home - which has NEVER happened to me. Is this little crumbling apt in central Austin really my "home?" There are other things that have happened this year that I cannot talk about here, but they may have contributed to this change in my psyche and it may be that my priorities are changing and that that is actually a good thing. I did notice that I was having a hard time letting myself have a good time, and that is an old way of being for me that I thought was gone forever. I feel like I am going backwards in confidence and bravery instead of forwards. There's a small sense of feeling defeated, that I might be trying to recreate something that doesn't exist anymore, and I can only guess that that comes from not deploying the last few years. It could be as simple as a low level long grieving of not having something in my life anymore that I loved beyond imagining. I still think about it everyday. I still apply for jobs and pursue leads there on a frequent basis.

As the words tumble out I am feeling better...since I learned how to write words on paper they have always set me straight. I don't know who reads this anymore and I'm assuming nobody does and that gives me a certain amount of freedom to just be as gutted as possible. I have been doing a couple of types of body therapies that have gotten me so sensitive that that might have contributed to this self consciousness. I have been working a lot in Austin and that has been good, and one of the little bright spots is serving at the homeless shelter, which may be having a bigger alchemical affect on my being than I may realize. As I was on this cruise being swathed in luxury and indulged by the gracious staff, there was a nagging feeling of boredom and play acting on my part...like this scenario had been working for me for about 10 years but it's not really working anymore and some aspects of my travel life need to really be revamped and fine tuned. I may need my travel to include service from now on, but since I don't like going to hot places that is really limiting me a lot..and every place is hot now! Moscow was sweltering! I almost got heat stroke in Helsinki! WTF northern Germany heat wave!

Something new and awesome in my life is the IDW...a big new world of intellectualism that I was starved for and have at least one friend to talk about it with. I am going to Taos in 12 days and it is going to be better than in May when I was going through something really really painful that I cannot talk about here - mainly  because I'm not sure what it was really about. It is good to go back though and have this constant in my life for 20 years...it is probably childish to think that every trip overseas and every painting workshop will be deliriously happy. My big fear is that aging is making me more bitter, which is something I am going to have to fight off like a Mel Gibson in Braveheart - just pull it out by the roots.

I heard Jordan Peterson talk about how there are no primal, powerful myths with women as the hero. That women being independent is a brand new thing. As we are designed to take care of children and be crippled by pregnancy we were not free to go on journeys and fight dragons and come back evolved and whole people like the great mythological stories that are always centered around men. This comforted me as it gave me a glimpse into why I feel so alone at times: I am a single woman who supports herself and travels around the world by herself and takes care of all her own needs, and is wrestling with internal dragons on a frequent basis (external as well, in the form of ill treatment by a society so threatened by the childfree middle aged woman who is not just a sweet old spinster biddy), and I have to take a deep breath every single day and drum up courage - courage to take on the world and say I am here, and still valuable as an employee and friend. Sometimes I feel like such an outlier that I will behave or dress more how I feel society will accept me as an older woman, but then I instantly rebel and kick out in my all back and skull booties. This is starting to ramble but it was really good to do...I feel more myself now and yes I could have just kept it in my paper diary and not posted it for the entire universe to read but what the hell  - ever onward, pushing forward.
Posted by petoonya at 7:41 AM